The Directoire period of furniture (late 1700’s to early 1800’s) was a result of French reign under five directors. Styling was controlled by a Jury of Arts and Manufactures. All emblems of royalty and aristocracy in furniture design were abolished. Classic decorations including griffins and caryatids are familiar in Directoire furniture. This period is influenced hugely by Greek, Egyptian, and Roman styling. Simple elegance characterizes this period. 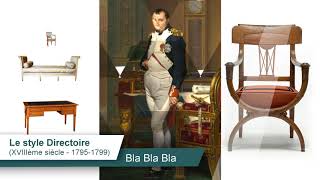